In its primary aspect, PBA can be used by any person, child or adult, to instantly manage their emotions daily.

The French PBA federation (Fédération Française de PBA) is currently in the process of setting up courses for adolescents during exams, or new parents looking to better control their baby’s emotions, as well as their own fears.

There are PBA circuits capable of alleviating states of depression, panic, hypersensitivity, negativity and obsession. There are others that can positively recharge all energy centres, or erase the scars etched in our energy system by dramatic events we have experienced. A person simply uses these circuits according to a given protocol, and in a few moments, they can face the situation that was throwing them off balance.

Each one of us can use these protocols.

The only way to be at peace with ourselves is to constantly make sure we are functioning on good energy systems, which we can do on our own using psycho-bio-acupressure.

In a way, this is a new healthy lifestyle.

But, as we have said, there is another application of PBA that is also fundamental, but is more specifically intended for specially trained practitioners:

PBA allows us to release emotional blockages (energy) related to negative past experiences.

What is important to understand is that all negative experiences, especially those that occurred in early childhood, can create conditioning that is almost impossible to escape.

For example, a child who is told by his teacher that he is no good the entire school year, will be more likely, at the age of 25, to refuse a rewarding job even if he is fully qualified because he will feel incapable of handling it. His lack of self-confidence is not in his character; it is the emotional (energy) blockage that set in during that school year that has replaced that aspect of his personality.

But this lack of self-confidence will end up sabotaging his whole existence if it is not released.

Or, a person will go from one failure to the next in his or her emotional life without knowing that he/she is systematically making wrong choices out of a fear of abandonment. Here again, the emotional (energy) blockage is created in childhood, following an event that is sometimes trivial, because the child, whose pre-frontal cortex is not fully developed, uses only his or her emotional brain (in particular, the amygdala and hippocampus) and is not capable of putting things into perspective, making it easy for blockages to occur. This fear of being abandoned may be linked to time in an incubator, parents going away for a weekend, or even a more trivial event, but once it sets in, it will cause emotional turmoil, because this fear of being abandoned will lead the person in question to unintentionally make poor choices time and time again.

In the same vein, we often fail to realize that an inability to become pregnant may be linked to taboos or fears that lead to emotional blockages on a completely unconscious level, or that many sexual problems are also related to blockages.

These emotional (energy) blockages act like switches on a railway, they are both unstoppable and unforgiving, and if they have not been removed, there is no way to make the train go in the right direction.

If we remove them, however, the train will arrive at its destination instantly, without having to add a watt to the power of the machine.

The practitioner’s entire art, as we have said, will consist in training his or her intuition to identify emotional (energy) blockages, and especially to learn to verbalize them with the patient while applying the appropriate acupressure circuit.

And the result over the following weeks will be spectacular: the person will regain his or her self-confidence or resolve his or her fear of abandonment or sexual issues in a way that is painless and long-lasting, without being shaken up, as is often the case with other therapies.

In fact, the only problem that, one might say, is currently paradoxically hampering the expansion of PBA is its effectiveness, its ease of use and its safety for patients, which are so revolutionary that those who have never tried it tend to be skeptical, because it seems “too good to be true.”

And yet, since its creation, Dr. Delatte has used it more than 30,000 times. And the practitioners he trains regularly use it, too, with great success.

In any case, if another type of psychotherapy becomes necessary, its effect will only be enhanced by the parallel use of PBA, and it will work much more quickly. Hence the interest in professionals to add PBA to their therapeutic arsenal. 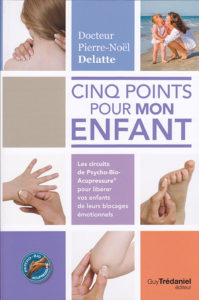 The circuits of Psycho-Bio-Acupressure® to free your children from their emotional blockages.
Including a third chapter for use by PBA practitioners.

The book is available to Editions Guy Tredaniel